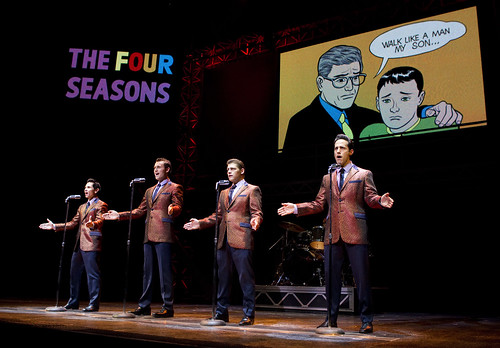 Paris Hotel and Casino in Las Vegas is home to the best show on the strip, the incredible musical “JERSEY BOYS”!   Rated the “#1 show in Las Vegas” and “must see show of the year, by the Las Vegas Review-Journal, I have to agree and take it one step further.  JERSEY BOYS is the must see and best show of the decade!

During a recent visit to Las Vegas for a travel conference, I had the opportunity to enjoy the amazing production of the JERSEY BOYS and sing along to 30 of Frankie Valli and the Four Seasons hit songs.

Sitting in the 7th row center seats, I was mesmerized by the 4 young men on stage.  TRAVIS CLOER, portrays Frankie Valli, JASON KAPPUS is Bob Gaudio, with JEFF LEIBOW as Nick Massi and DEVEN MAY as Tommy DeVito.  This group of incredibly talented young men took me on a magical trip down memory lane while sharing the story of the Four Seasons in a unique and different setting.   The Jersey Boys stars have taken each of their characters and made them their own.  Within the first 2 minutes of the production, you are pulled into the magic and the music and whisked away into the land of yesterday complete with authentic era costumes and jersey accents and of course music, music and more music. 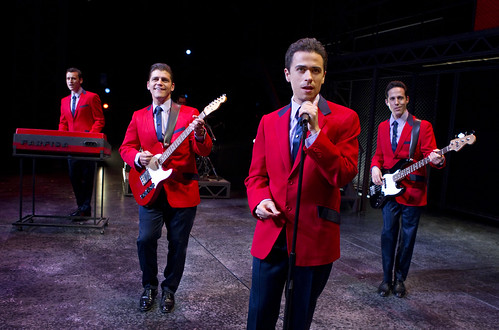 Rounding out the cast is JOE BARBARA as Gyp DeCarlo, JOHN SALVATORE who plays Bob Crewe, MEGAN NICOLE ARNOLDY  as Lorraine was spot on with her performance. KRIS COLEMAN plays Barry with AARON DeJESUS  as Joey who was one of my favorite cast members and JASON MARTINEZ  cast as Norm Waxman are just a few of the top notch performers who made up the cast of JERSEY BOYS.  All veteran stage and TV / Movie actors with talent overflowing the stage.

JERSEY BOYS is not your typical Las Vegas show or for that matter typical Broadway show. Each of the characters, take turns narrating different parts of the story. DeVito does the majority of the story telling which covers a 40 year timespan. A type of musical documentary, the music is mixed in perfectly as part of a club or TV performance and even a recording session or two making the show transition smoothly from scene to scene.   The actors’ talents not only encompass the acting and singing but have a way of drawing the audience into the stage and making you feel like you are standing next to them sharing the moment.

Based on the story of Frankie Valli and the Four Seasons, JERSEY BOYS takes you on a journey back in time and sharing how a group of blue collar Jersey boys from the wrong side of the tracks became one of the best selling pop artists of all times.  Writing and singing their own music, Frankie Valli and the Four Seasons faced hard and trying times, but they continued to crank out hit after hit. 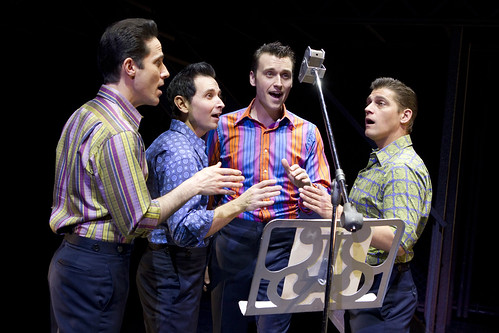 Don’t miss the chance to see the #1 rated show in Las Vegas.   Warning – you will be singing and dancing in your seats during the performance and for days to come.

Tickets range from $48 to $123 plus tax with VIP seating starting at $168 plus tax and fees and includes preferred orchestra seating, a signed post, a drink voucher and signed poster. 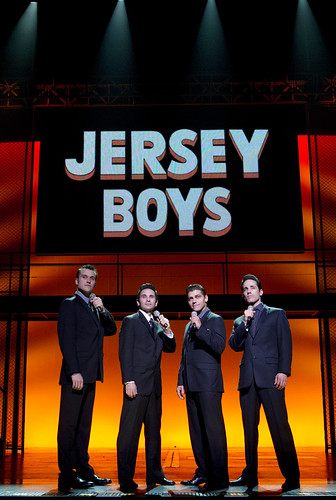 Show times for summer 2014 thru August 23rd are as follows:

Show times for 2014 beginning August 24th are as follows:

Contact me today to purchase your tickets for JERSEY BOYS and book your getaway at the Paris Las Vegas Hotel and Casino, located at 3655 Las Vegas Blvd, South Las Vegas, NV 89109.

Written by Loretta Garcia with Destinations to Explore Travel. Contact her today at Loretta@destinationstoexplore.com or 661-733-1094 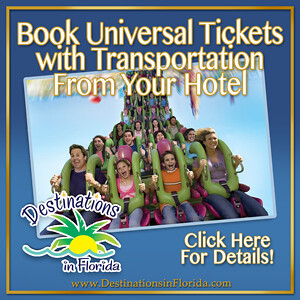